How KOREC are powering a Guinness World Record breaking attempt

Ian Williams is a man on a mission. Over the weekend of 7-8th August, he’ll be attempting to smash the Guinness World Record for the furthest distance travelled in a go kart in 24 hours, at the Teesside Autodrome British 24hr Challenge.

So how do you go about planning such an exhausting mission? Well first things first, Ian (not to mention Guinness) needed to know the precise distance of the track to be driven – which is where KOREC come in.

Whilst the official track length is stated as 2.1km, Ian needed a precise measurement – both to satisfy the stringent demands of Guinness, and to pace his race.

Ian searched around local survey companies before he was advised that KOREC might be able to assist with obtaining an accurate track measurement. Never ones to shy away from a challenge, we immediately knew this was a job for the MX9 and the Professional Services team.

Flash forward to 1st July, and our team met with Ian trackside. It took a matter of minutes to drive the race-day circuit layout in the MX9 scanning vehicle, capturing millions of measurements of data points of both track position, and elevation.

The data was processed back in the office, producing a dense 3D point cloud of the circuit, allowing for a centre-line to be produced – which came in at 1.64km in distance – almost half a kilometre shorter than the stated distance.

0.5km may not seem much to you or me, but when you’re planning to drive over 1000 miles, it works out at an additional 214 laps of the circuit – knowledge that means the difference between success and failure.

As well as providing these crucial measurements, the Professional Services team have generated beautiful 3D visualisations of the circuit, which have been incorporated into Ian’s marketing video – a vital piece of promotion for his charity drive.

Ian is hoping that his record attempt will raise £5000 each for his three chosen charities – Shelter, Papyrus (prevention of young suicide) and the Lincolnshire and Nottinghamshire Air Ambulance.

So how is Ian gearing up over these final weeks for this massive challenge?

“I’ll be focussing on building up my stamina by taking part in track days. I’m also conditioning my neck muscles, as they’ll be coping with around 70 tonnes of pressure over the 24-hour period. I’ve also upped my water intake, ensuring I am well hydrated, and getting used to a liquid diet”

(Ian won’t be consuming food during the attempt)

Whilst this is a solo attempt, Ian is far from alone. Upwards of 100 other racers will be on the circuit, with Ian hoping his kart’s bright livery will help him stand out from the crowd. He’s also got the support of the Haase UK Kart team, who have learnt him the kart, and his very understanding partner Alyona!

All of us at KOREC wish Ian the very best of luck in his challenge!

If you’d like to support Ian’s chosen charities, you can do so via his Justgiving page; https://www.justgiving.com/team/British24hoursolo 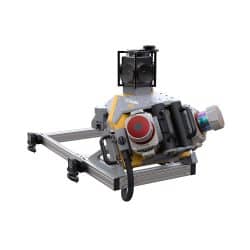