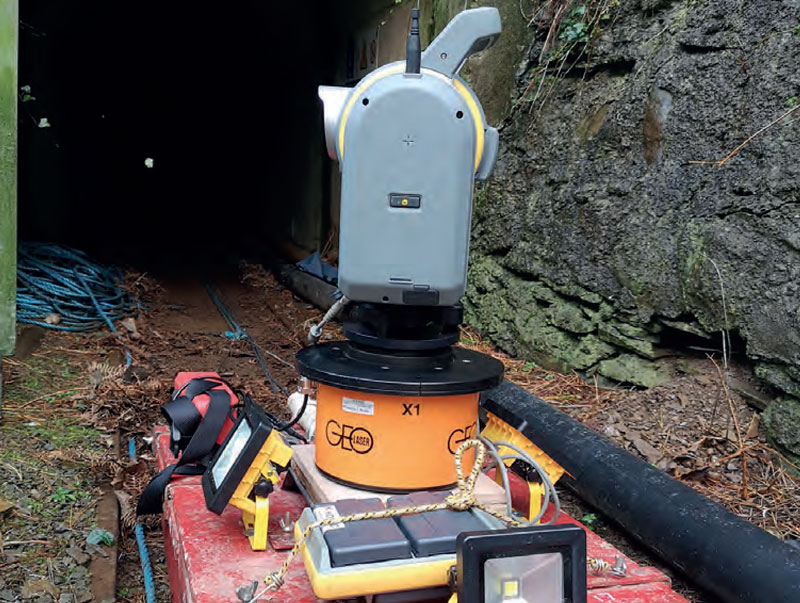 How do you produce an accurate point cloud of a 170m tunnel, with no human access permitted, that’s also home to one of Britain’s rarest bats hibernating over winter?

For Lee Husk, Director of Caerphilly based survey company PDS Ltd, a combination of over ten years laser scanning experience, a reputation for loving a challenge and the unique functionality of Trimble’s SX10 Scanning Total Station provided the answer.

Located in a steep valley in the Pembrokeshire countryside between the coast at St Brides Bay on one side and the River Solva on the other, the Solva Water Treatment Works has no access routes apart from an unused 170m tramway tunnel linking it to the town’s harbour. The only alternative is a demanding twenty minute uphill walk that makes the transportation of equipment to the works particularly arduous.

In order to find the best way to provide access, it was decided that a full condition survey of the tunnel would be undertaken starting with a CCTV survey to determine its safety. This would be followed by an aerial survey of the works and the surrounding countryside to complete a feasibility survey for alternative access solutions such as a new haulage road.

Contracted to undertake the work was Lee Husk, Director of PDS Ltd, who is known for his early investment in 3D Laser Scanning technology and experience in confined space work. For Lee, the aerial survey looked a large, but straightforward job that he planned to complete with his senseFly eBee X fixed wing drone. However, the tunnel survey looked more complex.

The client was already aware of signs of potential bat activity at one end of the tunnel. Therefore, prior to the ground-based survey works being carried out, the help of a bat ecologist was enlisted. If bats were present, the bat ecologist would take the lead and advise as required.

The first step was the CCTV survey. With no access allowed, Lee’s solution was to create a raft base for the camera which could be hauled through the tunnel using the existing rails and rope.

On completion, the CCTV survey revealed that, although the tunnel appeared to be safe, one of the UK’s rarest mammals, a horseshoe bat, was hibernating in a central section. The ecology expert, along with the client, reviewed PDS’s Method Statement & Risk Assessments for the second survey and requested that Lee carried out the work following a strict ‘No Entry’ into the tunnel policy to avoid compromising the sleeping bat.

Earlier in the year Lee had invested in a Trimble SX10 Scanning Total Station from KOREC which he had already used on a wide range of projects. Familiar with its functionality, he knew that it would generate the client’s desired deliverable of a high accuracy point cloud of the tunnel from which to create section and horizontal views. He therefore contacted KOREC to discuss a possible approach with the SX10 that would take into account the project’s unusual challenges:

Having checked certain aspects of the SX10’s performance with KOREC, Lee’s solution was to place the SX10 on the raft that he had used for the CCTV camera, but mounted on a self-levelling tribrach. Four monitoring prisms were then installed, two at each end of the tunnel, which would allow him to use the SX10’s total station resection functionality to establish control automatically for each of the full dome scans that would be carried out at 5-10m intervals. Additionally, LED lights (which produce a fraction of the heat of normal lights to avoid disturbing the bat) were approved by the ecologist and fixed to the raft to ensure that some imagery could be taken to add an extra deliverable for the client.

On the day of the tunnel scan, Lee used the Trimble TSC7 logger to control the SX10 remotely via a WiFi link with radio contact for back-up/checking. The WiFi link was sufficient for coverage 90m into the tunnel, at which point he abandoned the survey and repeated the process from the other end. Additionally, by doing a resection, Lee was able to confirm the quality of data in the field.

With the tunnel scan successfully completed, Lee opted to use his senseFly eBee X with a S.O.D.A camera for the aerial imagery. Over a period of two days, five flights were undertaken, each of a duration of around 35 to 40 minutes.

The S.O.D.A camera was the first photogrammetry camera to be built for professional drone use and captured the high-quality imagery that Lee needed for the production of the detailed orthomosaics and ultra-accurate 3D digital surface models.

Due to the eBee X’s RTK functionality, minimal ground control was required although Lee placed some markers as an additional check and to assist high accuracy results. This resulted in 14mm accuracy across the whole of the aerial survey.

Back in the office, Lee used Trimble Business Center to merge the surface model generated by the aerial imagery and the tunnel point cloud generated by the SX10. The final survey was delivered as an E57 LAS file and an indexed Autodesk ReCap file.

Lee concludes, “The client was delighted with the quality of the final deliverable. It was a major achievement for us to deliver work of this quality with no access to the tunnel or disturbance to the bat.

“This demanding survey has showcased every aspect of our SX10’s unique functionality and from the clients perspective, they had a contractor on site with vast experience in all aspects of survey and confined space work. It was a delight to take a lead role in such a highly sensitive project.”