For information on how KOREC have responded to the COVID-19 Pandemic, and access to our Risk Assessments, please click here. 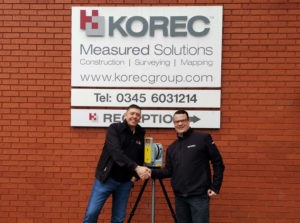 Ever since he was a kid, Barry Burrows wanted to get his hands on the latest technological gadget – from computer consoles to tech toys, he’s always had a strong personal interest in new technology.

In the Consumer world that we live in, people have strong associations to brands and are looking for brands that they can identify with. Barry Burrows is one of these consumers, and as the owner of a survey company operating in a very competitive environment, he likes to associate himself with a name he can trust. From his choice of vehicle (Audi) to the equipment he uses to drive his business (Trimble), Barry explains the importance of choosing brands that are “Trusted today and built for tomorrow”.

When founding his own survey company,  Barry recognised the importance of choosing the correct equipment so that when he went on-site he could overcome any issues with confidence,  investing in Trimble kit such as the S6 (total station), R6 (GPS)  and the revolutionary SX10 (total station/laser scanner hybrid) just months after their release dates.

So, it should come as no surprise that the founder & owner of BB Surveys has become the first customer in the UK & Ireland to own an X7 – the latest laser scanning solution which Trimble launched to much fanfare at Intergeo (Europe’s largest trade fair for geoinformation) in October 2019.

What is perhaps surprising is that Barry hadn’t so much as touched an X7 before making his purchase;

“I watched a few product videos on YouTube, read some online reviews and after about 15 minutes I knew that this was the right kit for me and my business”

Having already utilised laser scanning in his business for several years, Barry knew the benefits that the technology offers – for him, that means using the Trimble X7 to quickly and accurately collect external building data. But with his previous non-Trimble scanner, Barry found that many hours were eaten up processing unwanted data;

“With that scanner the amount of data collected was huge – I would easily spend 6-8 hours back at the office just processing the data, a lot of which was only needed for registration and would then be discarded”

In fact, Barry estimated that around 80% of his collected data was unwanted. With their average survey job requiring around 160 scans, that’s a huge amount of unrequired data. BB Surveys undertake around 60-70 jobs per month – a huge workflow for a small, 5-person team. So, for Barry and his team, time really is of the essence.

Barry noticed that after introducing the SX10 into their workflows, scanning jobs take 50% less time that they used to with the non-Trimble kit. It’s this huge boost in time-saving that convinced him of the merits of the new X7 scanner. That, and the pure simplicity and ease of use of the kit;

“Another feature that sold it to me was the auto-registration. Being able to complete hundreds of separate scans and not have to worry about tying them all together afterwards is a huge plus for us”

In its first few days of use, Barry has already been putting the new kit through its paces. His son carries out the bulk of the scanning for the company, and Barry has been impressed with how quickly the workflow has been picked up, with minimal training;

“He scanned a pub over the weekend, taking around 70 scans of the building. With no additional registration or processing needed, it took around 30 minutes to download and check the data”

What’s also crucial to Barry and his team is having hardware they can trust. With time being such a critical factor to his business, downtime due to instrument malfunction is wasted money. Barry has used Trimble for almost 30 years, and indeed, is still using the same Trimble software package today that he purchased in 1991!

The relationship with KOREC is no less important. Having been a customer for the last 12 years, Barry cites the people within the business, backed-up by technical & support expertise, as having sustained and grown this relationship over more than a decade.

It’s this combination of proven Trimble technology, backed-up by KOREC’s technical & support expertise, that make for a winning combination.

Our thanks to Barry Burrows of BB Surveys for this article.