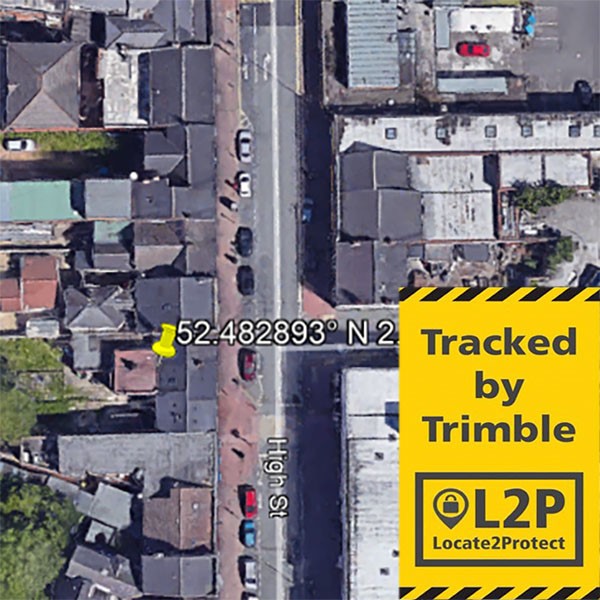 There’s nothing we like more than hearing about technology delivering exactly what it’s designed for, so it’s particularly rewarding to hear that Trimble’s L2P (Locate to Protect) tracking and AllTrak software has again assisted a KOREC customer in the recovery of a stolen Trimble instrument.

Haygate Construction is a small, family owned setting out company run by Yuk Yen Li and his son Peter. They are therefore reliant on staying productive in the field, often visiting several sites in the Midlands in single day to give the builders the next day’s work.

On a recent Monday, Peter was working on a site directly next to Aldi in Wolverhampton. At around 10.00am, he finished his setting out duties, packed the instrument away in his pick-up, locked up and went to wash his hands. He returned 5 minutes later to find the window smashed and the boxed S7 gone.

He immediately reported the theft to the police and contacted KOREC to see if we could assist. By 11.15, KOREC was tracking the stolen unit with regular updates in the form of screen grabs from Google Earth being sent to Peter who followed the trail accompanied by three colleagues.

The unit was tracked around Wolverhampton via several industrial estates and a shopping centre before coming to rest in the town’s suburbs. Peter arrived at the scene at 12.40 and aware that stolen instruments are often left for up to 24 hours to check that they are not being tracked, felt it was safe to investigate further without confrontation.

The unit was found outside a commecial building and it was back on site within the hour. KOREC has arranged to get it fully checked although all reports are that it is working fine.

Downtime on site and loss of work was avoided as was a lengthy and potentially expensive insurance claim.

KOREC was delighted to help and we urge all those hit by instrument theft to inform both the police and the TSA at www.tsa-uk.org.uk/equipment-theft