It’s always interesting for us here at KOREC to see what sort of reception a new product gets and we have to say the Trimble TSC5 Android data logger has certainly had its fair share of coverage on social media since its March launch. We’ve had everything from the Trimble ‘data logger evolution’ picture to some really useful feedback and opinion from all over the world.

Rather than reproduce a Trimble press release, we’ve decided to keep things fresh with a few bullet points and hot off the press feedback from those who’ve aleady been lucky enought to get their hands on a TSC5…and they don’t all agree!

The six stand out features of the TSC5 commented on by our KOREC customers:

“At Tri-Tech we embrace the latest technology and innovation and today I’ve been out stretching the legs of of one of our new Trimble TSC5 controllers paired with a Trimble R12i. A real step up in performance in so many ways from the much loved workhorse that is the TSC3. The TSC5 is lightweight, fast and seems very durable so far, so hopefully it will stand the test of time like the TSC3 has. It’s light but powerful and the hand strap on the side is a useful thing as is the protective ridge around the screen. They keyboard is great and I love that the light comes on with the caps lock. The fact that it’s Android is also useful because that means we have access to all the data storage apps as well such as Google Drive and Dropbox and dfx and dwg viewers. You’d need a USB C if you’re not using the data storage apps.  The battery life is also impressive. I was out yesterday, used it for around 9 hours and still had 50% left in the tank!

I’m still getting used to the screen because normally I use this version of Android on a larger one so would definitely recommend the stylus, at least initially.

I liked the TSC7 and I like the TSC3 but the TSC5 is a a great bit of kit and makes good business sense as and when we upgrade. All the team are looking forward to using it. Thank you to the KOREC Group and Amanda Bradshaw for getting the kit to us so promptly – great service as always.”

Ted has been trialling the TSC5 with his Trimble R12i

“I used the TSC5 the other day paired with Trimble’s R12i GNSS and noted some good improvements from the previous TSC3. The new Android system is exactly what was needed, this completely eliminates our use of USB’s as we can now directly download and then upload our data directly to our Google Drive system so all our information is accessible at any time. Another good improvement is the keyboard, I like how it is set out and with the LED’s that light up when you press the caps lock for example. Although it would be nice if the screen could fill the whole area, I’m not sure if that is physically possible. Overall I think it is a great logger and is a superb upgrade from the TSC3.” 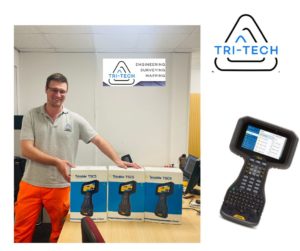 Jack Brittain does the unboxing!

“Finally got my hands on the new Trimble TSC5 today and….I love it!

The TSC7 is nice but I found it a bit too big for running around with. The TSC5 is thinner, lighter, very quicker and it’s easy to see what’s going on with a screen that doesn’t blind you. It also has a narrower neck so you can reach everything you need with a single hand. The TSC5 is a great addition to the range.” 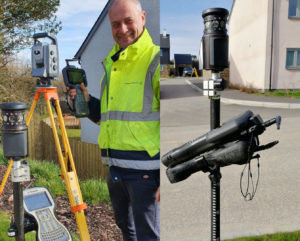 Paul Williams rates the form factor of the new TSC5